With all apologies to Dwight Yoakam. Oops, now to Nirvana as well. Sorry, just some musical humor. Speaking of music, I’m really enjoying the infusion of electric guitar into genres that don’t usually feature it. Big band. Exotica. Lounge. I guess you can call it worlds colliding. At least that’s what I call it, since I’m from the Seinfeld generation. Kids today call it mash-up. Whatever you call it, I’m really into it, when two or more seemingly unrelated things come together. It happens to me a lot, as I’ve rambled about previously in my musings about karma. Anyway, here are three examples of electric guitar boldly going where few had gone before.

Brian Setzer Orchestra.
Brian Setzer. You may remember him from such bands as The Stray Cats. They were pretty big back in the day, when MTV was king. Then, just when you thought he had fallen off of the face of the earth, Brian Setzer reinvented himself. With a big band. As the front man. Leading with his guitar in hand! It was 1990, and I was really starting to get into the swing and jump blues stylings of Harry Connick Jr. and Big Bad Voodoo Daddy. Then along comes BSO with something completely different: a guitar-driven big band. I was blown away! Not only did they do an amazing cover of Louis Prima’s Jump, Jive and Wail, but Brian Setzer also dared to do a big-band version of The Clash’s Brand New Cadillac. Only in their version, the bridge is a rocking version of Henry Mancini’s Peter Gunn Theme with a kick-ass Brian Setzer guitar solo to bring it home. Brilliant! Keep on rocking the swing world, Stray Cat! 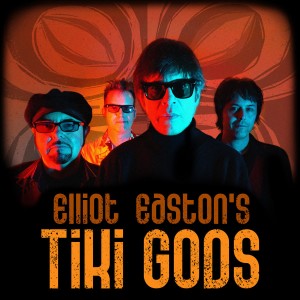 Elliot Easton’s Tiki Gods.
Hey, wait a minute – wasn’t Elliot Easton the lead guitarist for that 80s band, The Cars? He was, and still is, as The Cars released a nice comeback album in 2011. But he also has a little side project, Tiki Gods, and put out an album last year called Easton Island. I first heard about this album from Sven Kirsten, the godfather of all things Tiki. Easton Island is a collection of Tiki-inspired songs with an electric guitar flair, something not typically found in Tiki music. Elliot Easton doesn’t just cover songs; he wrote original music, ranging from lounge, exotica, surf and other genres from the Mid-Century Modern era. My favorite tune is Ballad of Cowboyardee, a clever homage to the melodramatic music of Spaghetti Westerns. Well played, Elliot Easton!

Five-Eaux.
Five-Eaux is the brainchild of my new Facebook friend John Bartley, a/k/a Jon Tiki. Based in St. Louis MO, this band has cranked out a half dozen tunes so far, and what an eclectic mix! The Pink Panther Theme. Taboo. Apache. Quiet Village. Telstar. And of course, a cool version of Hawaii Five-O. What sets John’s work apart for me is his reliance on the electric guitar to re-energize these old chestnuts. You expect that in the surf tunes, but not in the Pink Panther Theme, where John’s tremolo guitar replaces brass and sax as the driving instrument. And in Taboo, he channels Carlos Santana in a haunting, guitar-driven version of this classic Arthur Lyman exotica tune. Thank you, Jon Tiki, we look forward to hearing more of your music!

Now you can listen to this playlist here: