Exotica. It’s a misunderstood term, unfortunately. Probably because it sounds a bit like “erotica,” which it is not. Exotica is a style of music that got its name from an album by Martin Denny. Think relaxing, island music, with plenty of vibraphone, wordless vocals, and bird calls. As if you’re in the middle of a jungle and don’t really want to get out. I consider Exotica to be one of the five pillars in the Tiki canon: Panda’s Galaxy of Sound.

The big three of Exotica were Les Baxter, Martin Denny, and Arthur Lyman. Les Baxter began it all with his Music Out of the Moon album way back in 1947, which featured the unusual sounds of the theremin to create an imagined lunar soundscape. Baxter’s music was lushly orchestrated, as he went on to become one of Hollywood’s biggest soundtrack artists. His original version of Quiet Village remains the quintessential Exotica song. Martin Denny stripped down Baxter’s sound with his version of Quiet Village on his classic Exotica album in 1957. Denny’s vibraphonist, Arthur Lyman, struck out on his own and imbued the music with the soul of his native Hawai’i, including his album Legend of Pele from 1959.

Over the years, other artists have made Exotica music, and modern artists from across the globe have picked up the torch. Ìxtahuele from Sweden, The Left Arm of Buddha from Belgium, and Gold Dust Lounge from Florida, to name a few. This playlist celebrates a timeline of Exotica from its heyday back in the 1950s to the current day. I hope you enjoy hearing it as much as I enjoyed creating it. 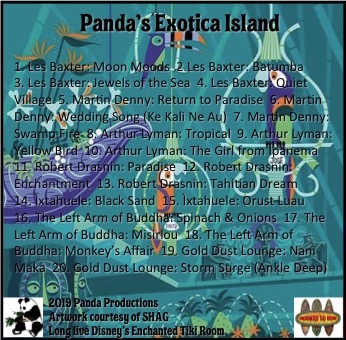 Here’s the soundtrack you can listen to on 8tracks: