There are many facets to the story of my Tiki journey. One angle I haven’t explored yet is my collection of Tiki pins. As I look back on the many pins I’ve gotten, and continue to get new ones, it suddenly occurs to me: these pins tell a story. With pretty pictures. Let’s start at the beginning.

Our first family vacation to WDW in Orlando FL was in December of 2008. We were on the every 18 month plan, which saw us journeying to the Polynesian Village Resort four times between 2008-13. These were the days before Disney Magic Bands, so you carried your ID cards in a plastic pouch on the end of a lanyard. The lanyard was a perfect place to hold pins, and we were quickly introduced to the art of pin trading at Disney.

Pin trading was a family affair, as my wife and kids were really into it. I also enjoyed it, and was fortunate enough to score my first Tiki pin (the one with the black Mickey ears hat) via trade. I loved that pin, and through a little research, I discovered there were two more Tiki pins in the set. I managed to find the second one in due time, again by trade (because they no longer sold these), but the third one eluded me. Then, one day, by dumb luck, the third pin (the blue one) found me. Seriously! We were walking through Animal Kingdom, on our way to the Safari ride, when a Disney cast member came running up to me and offered me a trade. He had noticed (from afar) the two Tiki pins on my lanyard and told me he had the third one if I was interested in it. I sure was! It was karma that this missing pin found me, early on in my Tiki journey.

Besides trading for pins, we also bought our fair share of them. At first I was drawn to the pins from some of our favorite WDW rides, like The Haunted Mansion and Tower of Terror. Then I discovered pins specific to the Polynesian Village, available in their main gift shop, Bou-Tiki. They had some fairly generic (but still cool) pins, and they incorporated Lilo and Stitch into some of them, an added bonus. During our first visit, which was during the Christmas season, I also found a special Holiday 2008 Polynesian Village pin. What a great find! It turns out they put out a new holiday pin every year. I have made it my goal to get one of these special pins every year that we visit WDW. So far, so good.

For my 48th birthday, Jess and I decided to take a trip to Los Angeles CA. My main motivation for the trip was to attend the 50th anniversary celebration of Disneyland’s Enchanted Tiki Room, the original. We also snuck in a trip to Whittier to visit Oceanic Arts, on our way to Anaheim. Jess wanted to try Disneyland, to see how it compared to Walt Disney World, which we had been to four times already. She also had never been to California and wanted to see Hollywood and Santa Monica. We ended up staying at the Disneyland Hotel, which is where the ETR celebration was being held, and put us close to Disneyland before we toured LA.

Magic bands were just becoming a thing at Disneyland in 2013, but we still had cards to navigate our hotel, which meant another pouch/lanyard and more space for new pins! Here I focused on the pins specific to Disneyland, including the hotel were we stayed, the iconic park sign, and the rides we really enjoyed. Some rides were unique to Disneyland (The Matterhorn), some were better here than at WDW (Space Mountain, It’s A Small World), and some not as good (Splash Mountain). It was fun to try them all, and I got as many pins as I could to remember our one trip to Disneyland. 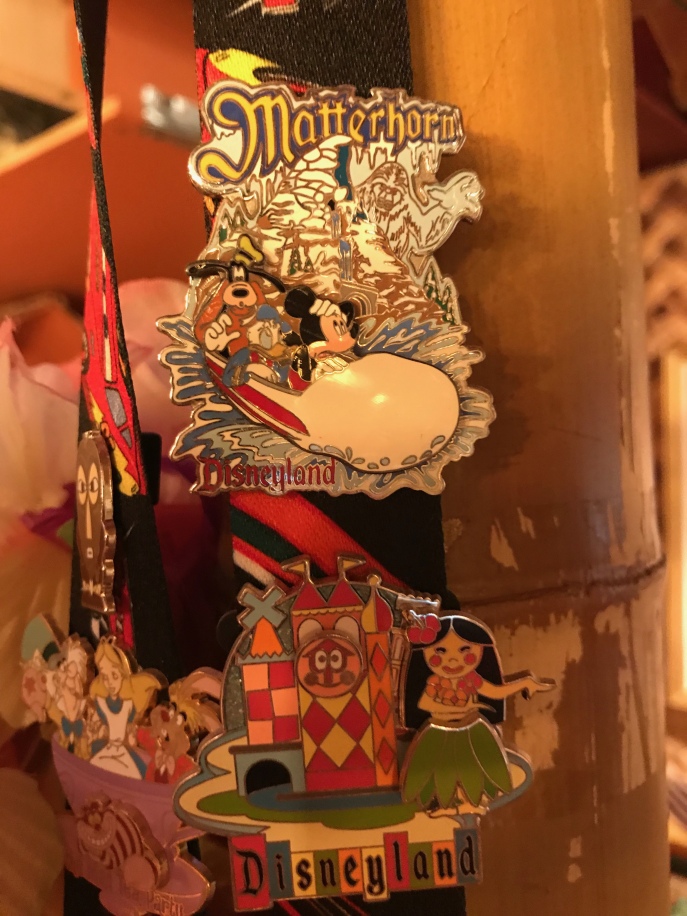 But let’s move on to the main reason for our visit: the 50th anniversary of The Enchanted Tiki Room! 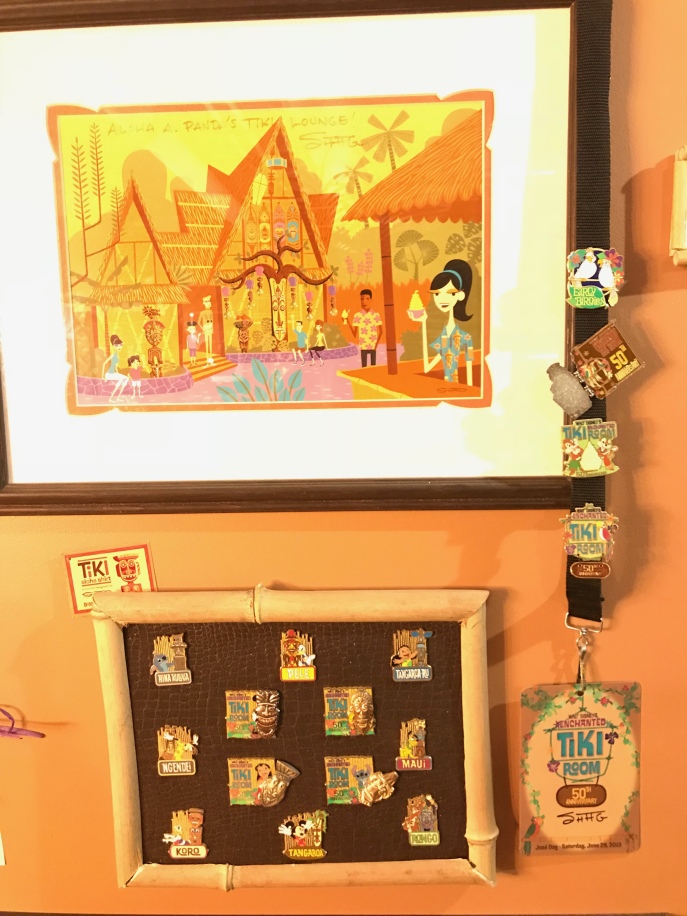 I was very excited for this event, mostly because it would be another opportunity to see one of my Tiki art heroes, SHAG. Disney had commissioned him to do some special paintings for this event, and I was lucky enough to get him to personalize a print for me. I had also pre-ordered a bunch of ETR swag that I picked up at the event, including some pins marking the 50th anniversary (displayed on yet another lanyard, this one for the event!). While we were at Disneyland, we of course did the Enchanted Tiki Room, which was another attraction much better there than at WDW. The main difference is the outdoor courtyard area, which features 8 animated Tiki god statues and a stand selling Dole Whip (as captured in SHAG’s art). I hadn’t planned on getting the special pins dedicated to each Tiki god, but after seeing them in person, I had to have those pins too. All are now displayed proudly in the ETR corner of the Tiki Lounge.

Back to Walt Disney World we go. A lot had changed when we returned for a family vacation in 2014. Magic bands had now replaced the old card system, so there was no need to wear lanyards anymore. They were building a new Tiki bar at The Polynesian Village called Trader Sam’s Grog Grotto, modeled after the Trader Sam’s Enchanted Tiki Bar at the Disneyland Hotel which had opened the year before (and we got to visit a mere weeks after it opened!). They also opened a new stand at the Great Ceremonial House, the Pineapple Lanai, where you could get Dole Whips and floats. And yes, they were building new over-water bungalows out back, and for a mere $2500 a night, you too could stay there. Too rich for our blood.

Anyway, though WDW and The Polynesian were changing, as were our family vacation plans (now on a 36-month schedule), my hunger for pins has not changed. I still seek out the special holiday pin every year we visit. Although we’ve only been back twice for full family vacations, we have been back for special trips at least once a year over the past 5 years. Even though we might not be there over the holiday season, I have friends in Florida who visit Orlando regularly and can pick stuff up for me. So, for example, we took a road trip in June that had us at The Polynesian for 4 days; the 2018 holiday pins weren’t available then, but you can bet I will have one of those pins hanging in the Tiki Lounge before the end of the year!

So, why did it take me 10 years to realize that other folks make Tiki pins besides Disney? I don’t know. Maybe I was distracted by other art forms, like paintings, Tiki mugs, and books. Or Tiki playing cards, like the cool Tikilandia deck designed by Robert Jimenez from LA. It was when I ordered two sets of these beautiful cards that I received one of Robert’s pins as a thank you gift. Well, that pin was so cool that I had to order another right away! I decided to display these pins on a new canvas, literally – the back of my Tiki bar director-chair stool, which is made of canvas.

Not long after I got the Tikilandia pins, I next discovered the Salty Dame and PinChe Loca pins made by Megan Besmirched from Chicago. Megan is part of the great Tiki scene in the Windy City that includes Kymm Bang’s gravel art and amazing Tiki bars Three Dots And A Dash, Lost Lake, and the Witco shrine of Hala Kaliki.

Finally, my newest pins come from Gil Taimana from San Diego. He is the owner of Tahiti Gil’s South Seas Trading Co. and Tahiti Felix’s Master Tattoo & Museum. I met Gil through the Disneyland Addiction group, and his artistic homage to Disney and the Enchanted Tiki Room is quite strong. Just look at these amazing pins! They really tell a story, and if you’ve been to the ETR at Disneyland, you appreciate the story even more. Pretty powerful that a tiny work of art can do that. 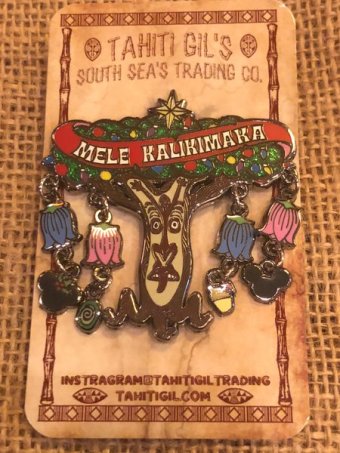