Before the Tiki craze completely engulfed me, I had another hobby that occupied much of my time: toy trains. I spent many years working on a layout that modeled my favorite season from the year of my birth, Christmas 1965. This layout now occupies the back end of the Tiki Lounge, which is kind of symbolic, I guess, since my toy train obsession has landed on the back burner for me. It wasn’t always this way.

When I was still a little boy, my dad gave me his old 1950 Lionel train set to play with. It was just a simple oval with a freight train, but it had given him much enjoyment as a child, and he wanted me to enjoy it as well. For years, we got that train out at Christmas and put it around the tree, only to put it away again once the holiday season was over. I continued that tradition with the same train into my adulthood, but I started to wonder: wouldn’t it be fun to keep this train up all year long? The seeds of a permanent train layout were planted!

In 1993, I toured the Yuengling brewery in Pottsville PA (an annual excursion with friends). On this trip, I noticed Yuengling had introduced a toy train car for sale: an O-scale Black and Tan boxcar, the first in their Signature Series of collectible train cars. The $40 I spent that day for that train car was the start of a huge addiction! Inside the box was a coupon for a free issue of Classic Toy Trains magazine, which of course I had to send away for, because it was free, you know? When I got that issue, I read it cover-to-cover and immediately subscribed to the magazine, a subscription I wouldn’t cancel for at least 15 years.

As luck would have it, the cover of that Classic Toy Trains issue featured a Lionel Train Shop building made by Department 56. Now D56 was more well known for its ceramic collectibles favored by old ladies, like their Dickens Village and Snow Village lines, the kind of stuff your grandma likes to display on her mantle at Christmas. However, some marketing genius at D56 realized that their buildings were the perfect size for O-scale train layouts. With this in mind, they started targeting train enthusiasts with their buildings and accessories, starting with their Lionel-themed beauty on the cover of Classic Toy Trains. Well played, Department 56. Well played. I bought my first old-lady collectible item.

I ended up collecting the entire Yuengling series of train cars, along with their collectible ornaments, featuring a different Yuengling brew every year and culminating with the Premium locomotive in 1998. Along the way I also managed to pick up a few more Department 56 buildings and accessories, including the ice hockey set, where the goalie manages to stop the scorer every time. Just like when I play. Worlds colliding.

So with these and many more pieces now in my collection, I had what I needed for my layout. With 1965, the year of my birth, as my inspiration, I envisioned an 8′ x 8′ layout consisting of 3 distinct sections: Main Street, Christmas Town, and Industrial Town. Main Street is anchored by Uptown Motors, a Ford dealership with a brand new ’65 Mustang on the turntable in the showroom.

Christmas Town features many sweet Department 56 buildings including the Hershey’s Village Sweet Shoppe and Krispy Kreme Doughnuts store. The focal point of Christmas Town is an oversized tree that houses many of my tackier Christmas ornaments (including the Yuengling beer cans) on display year-round. 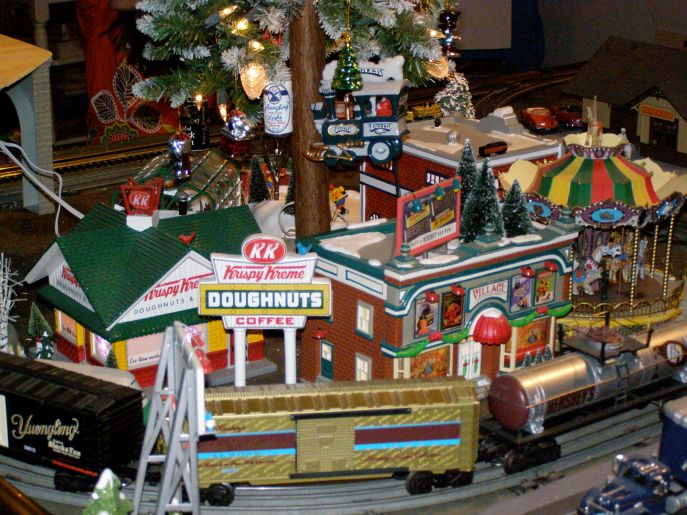 So the theme of my layout is Christmas, 1965. Everything on the layout – trains, cars, trucks, buildings, accessories – is from 1965 or earlier. That doesn’t mean I bought all old things; it just means that the things I collected all model the postwar era. All, that is, with 3 exceptions: the 3 modern 18-wheel trucks rumbling into town. I bought one of these customizable trucks for each of my kids when they were born: Natalia (1999), Lexie (2002), and Ryan (2005). I couldn’t resist these cool trucks as a tribute to my children! They come in both pink and blue, and have the vital statistics of each childbirth as a permanent reminder for me. They’re also symbolic for another reason: although this is a serious train layout, it is still a collection of toys, to be enjoyed by children of all ages.

2 thoughts on “Another Train of Thought”